Scouting for fixtures is a weekly blog for people who love the beautiful game. As well as seeking out the most entertaining games, each preview weaves the clubs into a greater football narrative. Each article is a selection of hand picked upcoming matches worldwide that week, which looks set for 90 minutes of non-stop action.

The last leg left us re-aligning our jaws after they collectively dropped at the 53′ mark. Yes, the game ended 3-1 in favour of Los Blancos. That 1 away goal is what Napoli is holding onto coming into the 2nd leg. In order to progress to the next round of the competition, the Naples have to either win 2-0 or if Los Blancos score, by a 3 goal deficit. If we go further, I wouldn’t bet my house on the idea of Naples keeping a clean sheet. So chances are, it’s going to play out where once Real Madrid score, it’s going to be an all-out attack. The last time we saw that we witnessed one of the best Champions League games ever. If these two could tap into that, we could witness another game akin to the 8 goal thriller we saw just 2 weeks ago.

The blood runs just a bit hotter and the ball is booted with more weight behind it*, literally and figuratively. I may be romanticising the idea of Italian passion when it comes to football, I mean their country is the shape of an actual boot. But, in all the time I’ve been writing on this blog, one thing has been made apparent. The Italians have set the benchmark when it comes to a proper derby. And this is the oldest of them all. Named after the landmark lighthouse, Derby Della Lanterna is not the game for you if you’re more accustomed to intricate passing or superstars. Instead, it is a breath of fresh air, as put eloquently by TheseFootballTimes:

While other games are characterised by violence and animosity, the Derby della Lanterna is all about divided families fighting it out for 90 minutes in the hope that their beloved side will give them something to shout about. It’s what a rivalry should be in football: passionate, loyal and largely friendly.

A derby by its very nature poses the ideal conditions for aggression and violence. The last paragraph was dedicated to a derby – one of the few – exempt from that stigma. This basque derby so happens to be exempt from that stigma as well. It’s easy to overlook this derby as it falls under the huge shadow of the El Clasico, but these two sides have their own story worth reading. Sociedad is the stronger side on paper, sitting higher on the table and scoring more goals. In fact, Bilbao’s form is the definition of inconsistent: LWLWLW. What makes these 2 sides special is the unwavering approach to every game. The intensity and fast paced style are trademarked by these 2.

Games I wanted to talk about but was too lazy:

Since Pál Dárdia took over a struggling Hertha BSC (finishing that season at 15th) a year ago, the Berliners finished 7th the following season and expect to continue a dramatic upward trajectory, currently floating above Borussia Dortmund at 2nd place. Both teams play direct football, Dortmund the most direct in the league with 31% of play coming down the middle, Hertha BSC just behind with 29%. Despite the similar playing styles, the disparity in creativity becomes clear with Dortmund attempting a huge 15.2 shots per game, for Hertha BSC the figure drops to only 8.7. Hertha BSC’s clinical striker Ibesivic is pivotal in this great run of form, contributing to 45% of all goals scored by the away side this season. We saw last week that an in-form striker can make all the difference, as a shaky Bayer Leverkusen overcame Tomas Tuchel’s side as start striker Chicharito secured a 2-0 win.

The two Italian managers have malignant issues spreading through their respective teams. For Conte, his Chelsea backline is giving way game after game, conceding 9 goals in  7 games. The irony being this was the same man who formed the greatest defence currently in world football at Juventus: Bonnuci, Barzagli and Chiellini. In fairness, this is Conte’s first season in the premier league, experimenting with a 4-1-4-1, 4-3-3 and 3-4-3. Their attack is promising, with Costa contributing to 50% of all Chelsea goals. Now looking to Claudio Ranieri, Leicester’s lack of form is in part due to a missing man in midfield. The new Chelsea man N’Golo Kante left a gaping hole in the middle of the park, as the only stats that saw a noticeable change over last season was tackles per game (22.9 last season to 16.1) and interceptions per game (21.6 to 14.6). Despite that loss, the tempo, clinical finishing and excitement in their UCL games are that of last season’s performances. The UCL presents a new territory to conquer while Leicester will never top their first ever premier league win, irrespective of the glory of winning a PL title. As a player how can you motivate yourself to win the PL again after what you achieved last season, and the nature in which it all spectacularly unfolded? So both managers come into the game with issues, yes, but their attacks are their strongest weapon of choice; be it Costa, Willian and Hazard for Chelsea, or Mahrez, Vardy and Slimani for Leicester. 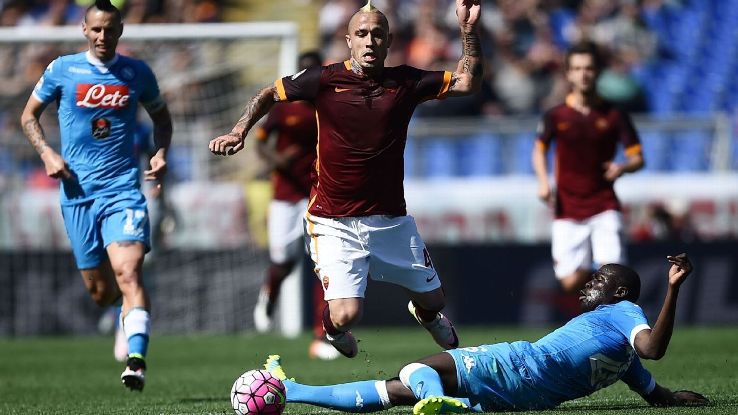 Roma’s manager Luciano Spalleti hopes his AS Roma side can win silverware this season, as he returns back to his club after 7 years. Roma is yet to win any trophy since his departure in 2009, leaving his club with a good foundation, 2 Coppa Italia’s and a Supercoppa Italiana trophy. Roma may sit 6th after 7 matches, but the attack is the best in the league, with 16 so far, the best of which is Stephan El Sharaarwy’s sweet strike.  While Napoli has just lost to Atalanta, their home record goes like this: WWWWWWWWW. Not bad. Milik, Mertens, Callejon and Hamsik are all targets for Roma defenders, with 13 goals and 3 assists between them. If any occasion were big enough to end the streak it would be this game, also known as de Derby del Sole (Derby of the Sun). As for Roma actually coming away with any points, good luck, but it should be a worthwhile experience watching attack after attack after attack after attack …

It will be the 107th year and 140th derby between the two biggest teams in Basque. Basque is an area of northern Spain with as much history as its representative football clubs, Bilbao and Sociedad. The unfortunate trend of most competitive derbies is division, fights and more violence, the Basque derby is a shining example of how a derby should be a celebration of the local area and bring people together (good luck trying to sell that to Tottenham and Arsenal fans). Nothing exemplifies this idea more that the fact both Real Sociedad and Bilbao fans sit side by side, with no stewards present. The significance of this derby is interwoven deeply between the areas political strain and some would say even religion, as one tourist guide points out: ‘We have two cathedrals in the city. The first where people go to pray; the second is the stadium of Athletic Club’.